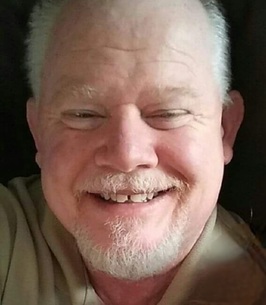 Albert Lyn Williams was born May 23, 1961 in Belleville, Illinois to Ruby and Jack Williams. He went to be with the Lord on April 25, 2022 at Elk City, Oklahoma at the age of 60 years, 11 months, and 2 days.
Albert and his family moved to Missouri when he was 10 years old. At the age of 17, he married his first wife, Lisa Cox. They were married 35 years and were blessed with 5 children, together. They moved to various locations in Missouri, Illinois, and Oklahoma. Albert always called Missouri his home, but he settled in Elk City, Oklahoma in 2008. In 2016, he married his second wife, Callie Long. They were blessed to have 1 daughter together and Albert loved his 2 stepsons as his own. Although, his marriages didn't last, he remained friends with his both of his ex-wives.
Over the years, Albert worked as a truck driver, mostly long-haul, logging over 3 million miles. He was very proud of that accomplishment. There never was a dull moment with Albert around. He really enjoyed making other people laugh, cracking jokes and telling stories. Some of his favorite pastimes was hunting, fishing, traveling, camping and swimming, especially at his favorite place in Missouri, Blue Springs on Jack's Fork River. He loved watching movies, preferably, comedies and he was always happy to watch the Cardinals play baseball. The thing he loved doing the most was spending time with his family and friends.
Albert spent the last few years with his girlfriend, Trina Weisbrod, along with his daughter, Ruby. Together, they were making plans for their future. Albert loved all of his family very much. He always said, "They are my world!"
Albert was preceded in death by his first wife, Lisa and by his daughter Elizabeth Williams. He is survived by his parents, Jack and Ruby Williams; his siblings, Debbie Hatfield and husband Bill, Jack Williams and wife Janie, Lonnie Williams and wife Sheki, Angela Bradshaw and husband Billy, Michael Williams and wife Pamela, Melissa Erhardt and husband Tim; his children, Tonia Fink and husband Brian, Carrie Mestanza, A.J. Williams and fiancé Taylor Snediker, Gary Williams and wife Alisha, his daughter Ruby Williams and stepsons Joseph and Ricky; 18 grandchildren; as well as a host of other relatives and friends.