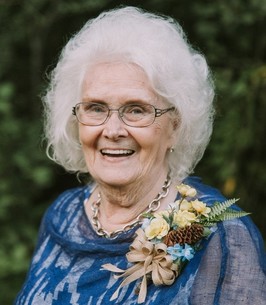 Bobbie Marie Bell went to be with her Heavenly Father on Friday, April 22, 2022 at the age of 85. The daughter of Isaac Dewey and Edna Lee Adkison, she was born April 1, 1937 in Center, Texas. She grew up in Texas and Mississippi and was the first in her family to graduate from high school. On May 4, 1957, she married the love of her life, George Michael Bell and together shared more than 59 years of marriage. Their marriage took them to Louisiana, California, and Ohio before settling in Maryland in 1967 where they raised their four sons, Michael, Gregg, Steve, George and daughter, Mary, before settling in Oklahoma City in 1987. Bobbie made friends everywhere she went. Her cheerful smile, loving heart, and selfless giving made her special to so many. She devoted her life to being a faithful Christian, wife, mother, homemaker, and “Grammy”, as nothing meant more to her than her family and friends. Grammy and Grampy’s house was the summer vacation spot for their 13 grandchildren where they shared tea parties, pool parties, cook-outs, candy, and hugs & kisses. Grammy dropped everything to be present for the births, baptisms, concerts, ball games, graduations, and weddings of her 13 grandchildren, and was the loving example that her children have followed in raising their families. There is no equivalent to the care, compassion, and support that she provided every day to those she met and loved so deeply. Bobbie died peacefully of natural causes with her children Steve, George, and Mary at her side. The family takes comfort in knowing that she has now entered her eternal home with her husband, son, brothers, and sister.

Viewing will be 5-8 PM Wednesday, April 27 at Vondel L. Smith & Sons, 6934 South Western Avenue, Oklahoma City, OK, with a prayer service starting at 6 PM. The Mass of Christian Burial service will be held 11:00 AM Thursday, April 28 at St. James the Greater Catholic Church, 4201 S McKinley Ave, Oklahoma City, OK 73109. Her family will have a private burial service in Clinton, MD at Resurrection Cemetery. Memorial donations are suggested to be made to St. James the Greater Catholic Church. Friends may leave condolences for the family at vondelsmithmortuary.com