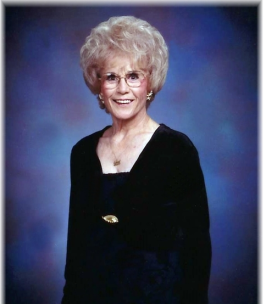 EUNICE FLANAGAN CARPENTER
Eunice Flanagan Carpenter was born September 28, 1930, in Oklahoma City, OK. She was raised in Dustin, OK and married Sam Norris Carpenter in 1948. They had two children, Donna Sue and Larry Gene. Eunice left this earth on November 3, 2022 to go to her grand eternal home to live with her heavenly father and her dear family and friends who preceded her; daughter, Donna Sue Carpenter, 1959, age 10 years; husband, Sam N. Carpenter, 1987; mother, Effie O. White, 2004; step-Father, Lloyd W. White, 1983; grandmother, Molly Bell Hughes; sister, Edna Annette Cook; nephew, Tim Cook; and many other close friends and family.
Eunice was a proud nurse. Her 32-year career spanned many diverse clinical areas, including surgery, before retiring in 2004. She worked with children for most of her life, teaching Sunday School, directing youth camps, established a truancy program for at-risk public-school children, taught drug and alcohol prevention, and founded Eat of This Bread Institute, with her husband Sam, a place to establish families and children for success. She later wrote a book titled “Eat of This Bread” published in 2014 detailing her work at the institute and her life’s missionary role. Eunice loved to cook and spend time with her beloved family. Her legacy includes her steadfast faith in God, and she epitomized the virtuous Proverbs 31 woman. Her selfless attitude exemplified a life well lived, she would do anything, for anyone, at any time. Her greatest desire in life was to see her children saved and in church. She would often quote the book of James and tell us “Life is like a vapor”, we are only here for a short time. Do good things and do all things with Him. She was extensively involved in church work, locally and abroad with missionary work in both Haiti and Mexico in the 1960’s and was a devoted member of Faith Church in Oklahoma City from the early 1980’s until her passing. Her dedication to helping others made her a mother figure to many children and adults throughout her years of service and she will be remembered for her persistent desire to help and witness for her faith.
She is survived by her loving son Larry Carpenter and wife Cindi of Edmond; grandchildren Eli Carpenter of Edmond, and Zac Carpenter and wife Ann of Ft. Myers, FL; great-grandchildren Evelyn Carpenter, Finley Carpenter, Aubrey Carpenter, and Ivy Carpenter; niece Patricia Harris and husband Ronnie (and family); nephew Eddie Cook and wife Paula (and family); the family of nephew Tim Cook; and a host of close friends and adopted family members.