In Memory of
Jack L
Whitnah
1929 - 2017
Click above to light a memorial candle.
Memorial Candle Tribute From
Vondel Smith Mortuary
"We are honored to provide this Book of Memories to the family."
View full message >>>
Send Flowers
Menu

In the event that there is an error
in the information presented,
please contact the funeral
home by clicking here. 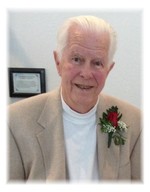 Viewing & Visitation Thursday, September 7, 2017 from 4-8 PM the family will be present from 6-8 PM to greet friends at the funeral home.

Services to celebrate his life will be held on Friday, September 8, 2017 at 2 PM at Hillcrest Presbyterian Church 6600 S. Pennsylvania Ave. Oklahoma City, OK 73159

Following a brief illness, Jack, aka PawPaw, 88, peacefully passed away surrounded by his family, Saturday, September 2, 2017. He was born in Oklahoma City to Chester H. & Nell L. (Rushford) Whitnah on June 26, 1929. He graduated from Capitol Hill High School in 1947. He faithfully served his country from June 1948 until he was Honorably Discharged in May 1952. Jack’s parents owned Capitol Hill Florist and during his time of service he would collect flower orders from his fellow servicemen and send them home for his parents to fill the floral orders for special holidays especially Mother’s Day. In the fall of 1952, the Oklahoma City Florist Assn put on a flower show, it was there that Jack met LaVernne “BURNY” Higdon, whose parent’s owned Higdon’s Flower Shop & Nursery on NW 39th St. He asked her out but she could not go because she had signed up to count votes for the big election between General Dwight Eisenhower and Adlai Stevenson, however, the following night, in early November, they did go to the movies and thus began their 64 year love affair. They quickly became an item and decided to squeeze their wedding in between two of Burny’s sister’s weddings in early 1953. So, on April 18, 1953 Jack and Burny were united in marriage at University Place Christian Church in Oklahoma City. They were founding members of Hillcrest Presbyterian Church on South Penn and spent their entire married life attending this church, raising their children here and making lifelong friends. Jack & Burny worked together in the family business, Capitol Hill Florist, alongside his parents who founded the business in 1932. In 1991, at the age of 62, Jack retired to spend more time at the lake and travel. Although he piddled with golf, painting and fishing throughout the years, Jack had no lifelong hobbies. In the last 20 years following retirement Jack returned to the flower shop to work part-time assisting his son, Kent, who had taken over the flower shop. He enjoyed spending time with his family and friends at the lake. His father, Chet, bought a small fishing cabin sight-unseen in 1966. This would be Jack’s go-to vacation, get-away place for the next 50 years. He would often say that he must have taught half of the kids in S. OKC how to water ski…or, at least it felt like it! There was just something special about Jack and Burny. They will be remembered as being inclusive, loving and giving. Whatever they got right or whatever they got wrong it somehow ended up growing a bond between the family that has been unbreakable and spans four generations. In recent years, Jack loved going to Grill-on-the-Hill for lunch and to catch up with his Capitol Hill High School friends. He was Gastineau Racing’s #1 fan.

He will be greatly missed & leaves cherished memories with his family:
Wife, Burny;
Two daughters: Nikki Cheatham & husband Eric; DeeAnn Gastineau & husband Steve;
Two sons: Ted Whitnah & Kent Whitnah;
10 Grandchildren: Austin Cheatham & wife Franni; Angela Young and husband Jason; Whit Gastineau and wife Katie, Drew Gastineau and wife Lacie, Beau Gastineau & his girlfriend Brooklyn Hall; Rachel, Cecilee (and their Mother, Cheri) Whitnah; Chet, Shaley and Cooper (and their Mother, Cindy) Whitnah;
5 Great Grandchildren: Lyzi and Derick Cheatham, Racee and Charlie Gastineau and Lincoln Young all of whom loved him dearly and already feel a void by his loss.
We will forever miss the words that he would speak anytime you were leaving him. “Be careful. I love you!”


To send flowers to the family or plant a tree in memory of Jack L Whitnah, please visit our Heartfelt Sympathies Store.

Admin Obittree|Privacy Policy|Terms of Use|Sitemap|Powered by FrontRunner Professional
Share by: