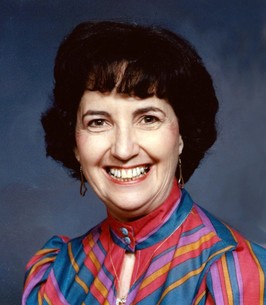 Having lived the past 6 ½ years at Sommerset Assisted Living Facility and following a brief illness, Burny, aka ‘Myne’, 89, peacefully passed away Friday, September 20, 2019. She was born in Oklahoma City to Charles Y. Higdon and Winne Fern (Nichols) Higdon on November 18, 1929. She graduated from Classen High School in 1947. Burny’s parents owned Higdon’s Flower Shop & Nursery on NW 39th and May. In the fall of 1952, the Oklahoma City Florist Assn put on a flower show. It was there that Burny met Jack, whose parent’s owned Capitol Hill Florist on S. Robinson. Jack asked her out but she could not go because she had signed up to count votes for the big election between General Dwight Eisenhower and Aldai Stevenson. But, the following night, in early November, they did go to the movies and thus began their 66 year love affair. They quickly became an item and decided to squeeze their wedding in between two of Burny’s sister’s weddings in early 1953. So, on April 18, 1953 Burny & Jack were united in marriage at University Place Christian Church in Oklahoma City. They were founding members of Hillcrest Presbyterian Church on South Penn and spent their entire married life attending this church, raising their children here and making lifelong friends.
Burny graduated in 1951 from Oklahoma A&M (Oklahoma State University) with a BS in Horticulture and was a life-long, orange wearing, pistols firing Cowboy. While at OSU she joined the Alpha Delta Pi Sorority. She loved her Sorority and spent the next 50+ years affiliated with the ADPi Alumnae association holding many offices including State Alumnae President and local President 3 times. She worked many hours on philanthropic projects such as the Ronald McDonald House and made many trips to Stillwater serving on the Corp Board to help oversee the running and upkeep of the house. In 2000 she was voted ADPi Alumnae Woman of the Year.
Even while raising 4 kids she found time to be involved in many activities never letting the grass grow under her feet! In 1963, following the birth of her 3rd child and 1st son, she helped organize the first pre-school in south Oklahoma City at Hillcrest Presbyterian Church. As Pre-schools do, it catered to 3 and 4 year olds. It was NOT a coincidence that her son, was turning 3 the year she decided to take on this project! She assisted in running the Pre-school for 15 of its 29 years. Variety Health was another one of her favorite philanthropic organizations. She served on the Variety Board for 10 years. For many years she was a member of the Frontier Country Republican Woman which met at Dodson’s Cafeteria. During election season she would walk neighborhoods and man the calling banks working to get people out to vote. She was voted Woman of the Year for Frontier Country Republican Women in the late ‘90’s. She also found time during the kids schooling to be the PTA President at both Prairie Queen Elementary and Jefferson Jr High.
The one thing that she participated in from college until she went to live at Sommerset was Bridge. SHE LOVED PLAYING BRIDGE! There were nights, probably once a week, where she would get dinner on the table, the dinner dishes done and shortly thereafter, leaving Jack to get the kids in bed, she would head out the door to go to a friend’s house to play Bridge or 3 other women would show up at our home. She and her Bridge friends were always, and I do mean ALWAYS, looking for a 4th. She had sorority Bridge friends, church Bridge friends, family (sister’s Char and Carol) Bridge friends, college Bridge friends and if they were at the lake and needed a 4th they would contact complete strangers who they heard liked to play Bridge to become a new Bridge friend! She was such a fanatic that she played Duplicate Bridge to acquire the points required to become a Life Master. They could (and would) re-deal Bridge hands just to see how they could have played them better.
In the late ‘90’s she and Jack sold their 66th Street home and built a beautiful new home in the Eastlake Patio homes. They moved into the new home in 1996. Little did they know that they were about to have the adventure of a lifetime! May 3rd, 1999 they were home and Jack was just getting ready to make dinner when Kent called and told them that they needed to leave….that a tornado was headed their way. He told them to come to the flower shop which would be out of the line of fire. They said they had pillows and a blanket in the bathtub and that they would be fine. After a 2nd call from Kent and upon Burny’s urging, Jack put dinner on hold, Burny grabbed her purse ... unfortunately not the one with her billfold and money, and they left, driving the shop van so her car wouldn’t get hail damage. When they returned there was virtually nothing left. Her car was in the tree behind where the house had been standing and they never did find that bathtub they were going to hide in!
Burny was preceded in death by her husband, Jack; her parents, Charlie and Winnie Higdon; and her sister, Char Gulick. She leaves behind her children: Nikki Cheatham and husband, Eric, Dee Ann Gastineau and husband, Steve, sons Ted Whitnah and Kent Whitnah. Grandchildren: Austin Cheatham and wife, Franni, Angela Young and husband, Jason, Whit Gastineau and wife, Katie, Drew Gastineau and wife Lacie, Beau Gastineau and fiancé, Brooklyn Hall, Rachel and Cecilee Whitnah, Chet, Shaley and Cooper Whitnah. Great Grandchildren: Lyzi and Derick Cheatham, Racee and Charlie Gastineau, Lincoln Young and Walker Gastineau. Sister’s: Carol McLennan and husband, Richard, of Lawton, OK, Patti Sharp, of Tahlequah, and Judy Hatley of Oklahoma City.
The family wishes to express their heartfelt thanks and appreciation to the staff of Sommerset Assisted Living for providing such tender and loving care of our Mom. We are eternally grateful.