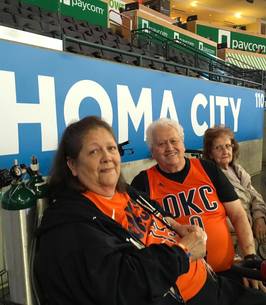 Paula Janelle Weatherly, age 70 of Oklahoma City passed away March 8, 2022. She was born October 13, 1951, at Perrin Air Force Base, Texas, to Clabron Boston and Clair Bell (Parker) Boston-Rutledge. She worked in medical coding and posting of insurance payments for various doctors until her retirement. Paula loved being with her husband Donald Weatherly, she also loved going to the NBA Oklahoma City Thunder Basketball games. She was a season ticket holder from the beginning of their play.

In addition, Paula was preceded in death by her:
Parents and
Sister, Sandra Herndon.

Paula loved and lived each day in the end like there was not going to be another and put up the good fight. She was a compassionate and loving woman and will be greatly missed.