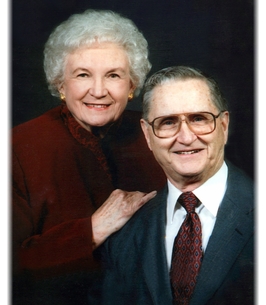 Retha Maxine Newton passed away on February 22, 2022, in Oklahoma City at age 90. She was born on December 14, 1931, in Weatherford, Oklahoma.
Maxine grew up on farms south of Weatherford, the third child of four children of Leonard and Rose Hunnicutt. She graduated from high school in Weatherford in 1950 and took classes at Southwestern State College. She moved to Oklahoma City and worked as a secretary at Tinker Field, where she met Morris. They were married on July 4, 1953, at First Baptist Church in Oklahoma City. They had two sons. She returned to work as a secretary at United Cerebral Palsy Inc. and retired from there in 1986 after 17 years.
She and Morris were active at Rancho Village Baptist Church, volunteering for church construction projects throughout the state and teaching Sunday school classes. Maxine was a quilter and spent many hours with the church sewing group making quilts for Baptist Children’s Home. She helped design and sew the banners displayed in the church sanctuary.