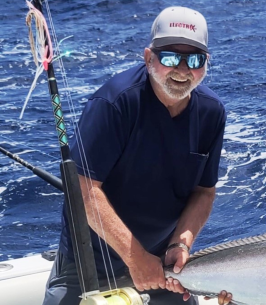 A memorial service to celebrate Rick’s life will be held at 10:00 AM, Friday November 18, 2022 at Vondel L. Smith & Son’s South Colonial Chapel.

Richard “Rick” Wayne Jordan passed away on November 14, 2022 at his home surrounded by family. He was born in Oklahoma City, OK on February 17, 1956 to Thomas and Evalyn Jordan. Rick grew up in south Oklahoma City and retired as a truck driver from Fed Ex Freight Transportation. He married Barbara Klicker on August 5, 1974 and from their union they had three children: Tommy, Ricky, and Shannon.

Rick enjoyed watching old westerns, playing poker with his friends, going to the casino and riding his Harley Davidson. He also played golf, softball and was an avid fan of the Oklahoma State Cowboys. He cherished spending time with his family, especially his grandchildren. He enjoyed going to the races with his grand kids.

He was preceded in death by his:
Parents;
Brothers, Ronnie Jordan and Dean Jordan.