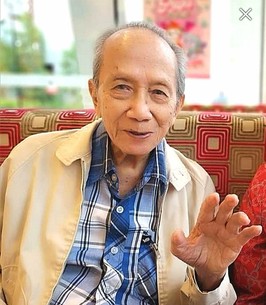 Memorials in his honor to further the work in the Philippines should be directed to Shartel Church of God via www.shartelchurch.org

It is with profound grief and sadness, that we announce the passing of our highly esteemed spiritual leader, Rev. Rolando Echavez Bacani, aka “Bishop”, a great man of faith, the pioneer and emeritus head pastor of the FIRST CHURCH OF GOD Philippines and several of our national CHURCH OF GOD MINISTRIES. He went home to be with Jesus on Sunday morning, May 29th, 2022, at Mercy Hospital in Oklahoma City, Oklahoma, USA. Rev. Dr. Rolando Bacani was born on October 21, 1927 in Manila, Philippines.
Life History
As a purpose driven young man, he studied to become a civil engineer. After graduation, he married his sweetheart, Bernie, on June 20, 1953. He was immediately offered a contract with the US Navy base in Guam. During his time in Guam, he was led to the Lord and this is where his lifelong commitment to serve in God’s Kingdom began. Eventually, he sailed from the Philippines to attend a theological seminary in Houston, Texas and immersed himself in God’s Word. In 1959, he received his Bachelors of Arts in Biblical Studies and Theology and was ordained by Church of God (Anderson). He later obtained a Masters Degree in Education, and two Doctorate Degrees to further his evangelical and missionary pursuits.
After four straight years in the seminary, Rev. Dr. Bacani returned home and pioneered the First Church of God in the Philippines with his wife. Together they were instrumental in planting over 75 churches in the mission field and various ministries. His love for the Lord and for the Filipino people not only ignited his passion for church planting but to pioneer the first Christian school in Valenzuela in 1965. VALENZUELA CHRISTIAN School (VCS), which started as a nursery school, eventually became a cornerstone institution in the community, integrating the Christian faith with K-10 education. The church and school's mission to bring the unreached to the Lord would become the very foundation in developing its first international Child Sponsorship Program (CSP). By the early 70s, the CSP in partnership with the Church of God (Anderson) was established. The success of the program exploded and in 1994, the school had reached almost 2,000 students. Each year this program helped hundreds of families learn about Christ. Along with the success of the school, churches were being planted throughout the country under the passionate and visionary leadership of Rev. Dr. Bacani. As the churches grew, the need for a Bible school became apparent. Rev. Dr. Bacani spearheaded the curriculum development for the newly formed Pacific Bible Institute in Valenzuela. This was successfully replicated in other regions of the country, affirming him as the National Director. Several pastors and church workers were trained in Biblical studies and church ministry under his mentorship.
In 2007, he was honored as a Bishop by a council of Evangelical Bishops in the Philippines, for the successful ministerial work he had done within the faith-based education sector and for more than 75 churches that were planted throughout remote areas in the mission field. Since then, he was affectionately called “BISHOP” by the people. He was given many tributes as a gracious spiritual mentor, compassionate and generous, father to the fatherless, a righteous leader, master educator, fervent prayer partner, a faithful husband, and a loving family man. He always had an encouraging word to make a person smile. He had a kind heart and would always help wherever it was needed.
At the most recent Mid-America Christian University’s (MACU) Commencement Program, a remarkable honor was given by former MACU President, Dr. John Fozard, to the “Bishop” Rev. Dr. Rolando Bacani as the first foreign graduate to return to his homeland and be recognized for his unparalleled leadership, humble Christian service and ministry accomplishments. His academic diplomas from years 1959 and 2008 (Honorary Doctor of Divinity) were presented to him as part of his memoirs. The extensive faith achievements and countless humanitarian efforts for the Filipino people and to the expansion of the gospel of Jesus Christ brought honor to God, to his family, to his Alma Mater, to the Church of God Ministries (Anderson), to the First Church of God Philippines, VCS and partner ministries. This would be the highlight of his final trip to the US. Three weeks following MACU's special honor, Rev. Dr. Rolando Bacani peacefully departed this earthly life shortly after the morning church service concluded, to join his wife, Bernie, in their heavenly home. A strong tenor was welcomed by the choir of angels that day!

We invite you to his Home Going Celebration Service on Saturday, June 18, 2022, 10am at Shartel Church of God in Oklahoma City, OK. LIVE online streaming will be provided. A lunch reception immediately follows. Pastor Steve Chiles will be the hosting this event. Viewing will be available from 4pm-8pm, on June 16 and 17, Thursday and Friday, at Vondel L. Smith and Sons at the Lakes, 4000 SW 119th St. OKC, OK.